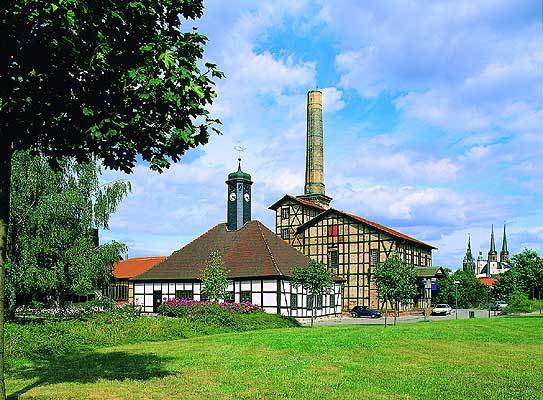 The museum of workers employed in the salt works of Halle and the salt works themselves is located on the grounds of the former Royal Prussian salt works and documents the extraction of evaporated salt as one of the most important trades in Halle, which left its decisive imprint on the history of the town for many centuries. The still preserved dwellings range from a building dating back to the time the salt works were established (around 1720) all the way up to the last additions from the 1930s. In 1964, the salt works had to close due to economic reasons. In 1969, the museum was opened.
The salt works worker museum is located in a former salt barrel depot. The exhibition comes alive with such 19th century equipment as an operational boiler pan with all necessary additional equipment, i.e. drying pan, conveyor belts and filling station, which all serve to illustrate the extraction of salt up to its packaging. An annual production of about 1.400 hundredweight make this salt museum the smallest salt producer in Germany and the only salt-producing museum in Europe.
Once a month, visitors may attend an exhibition of the boiling process, which illustrates the salt production directly. Visitors may also view a portion of the one-of-a-kind silver treasure of the salt works workers.