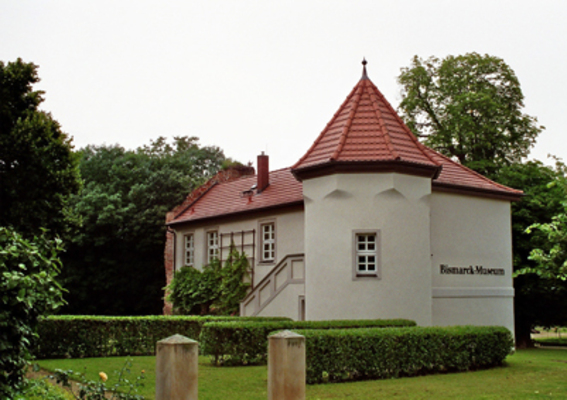 The Bismarck Museum in Schönhausen, which was in 1998 with the help of funding from the state of Saxony-Anhalt, became a branch of theOtto von Bismarck Foundation in 2007. The Foundation is one of five political memorial foundations of the Federal Republic of Germany. The objective of these foundations is to reflect the way of life, thought and political heritage of major German statesmen at an authentic historical location and,also, to shed light on the diverse history of their given era. The Otto von Bismarck Foundation is headquartered near Hamburg in Friedrichsruh, which is where Bismarck died and was buried.

The ensemble of historic sites in Schönhausen provides the basic preconditions for the realization of the foundation's mission. As tangible testimonies of the past, the meticulously restored and preserved section of Otto von Bismarck's house of birth ("Schloss I"), the Romanic church in which he was baptized, as well as another preserved manor house ("Schloss II") formerly owned by the Bismarck Family make history clear and vivid.

The educational objectives of the foundation are further supported by the exhibition housed in the last remaining wing of Schloss I, the rest of which was torn down in 1958. Most of the objects presented in the exhibition come from the initial museum established in Schloss I in 1891, while Bismareck was still alive. That museum remained open to the public until 1948, after which its collection was distributed among other museums.

The exhibition pieces consist primarily of gifts given to the Chancellor as expressions of appreciation, and also include some imperial gifts that often have a reference to important historical events. A selection of personal items and numerous certificates of honor and congratulatory messages complement the exhibition. The exhibits give testament to the taste and aesthetics of the era.

Since 2000, the museum has also displayed the largest public collection of embossed medallions featuring the German Chancellor. The collection, which consists of approximately 250 medallions, plaques and pins, was acquired by the State of Saxony-Anhalt and is on loan to the museum. As with the collection of gifts, this collection offers an impression of the then-contemporary cult surrounding the statesman venerated as the "Founder of the German Empire" and is a starting point for posing further questions on German and European history.