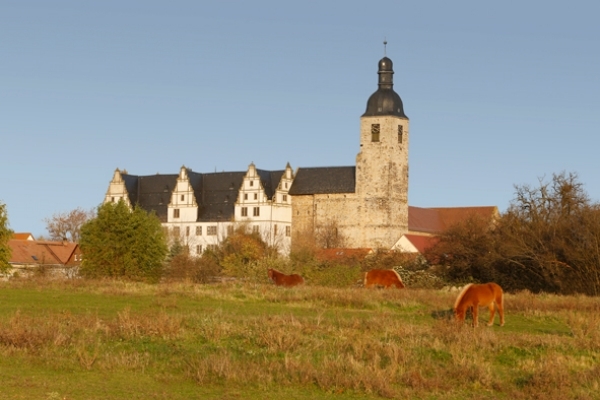 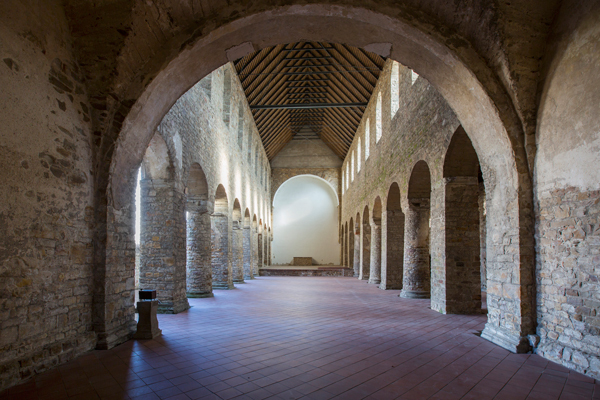 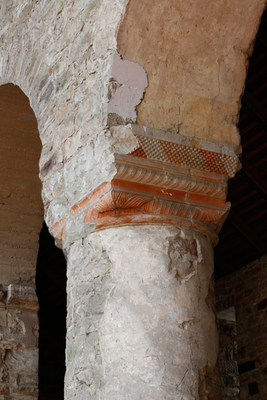 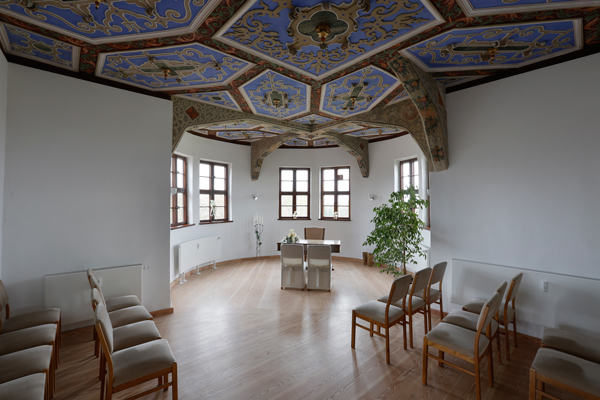 Bishop Wigger of Brandenburg established a Premonstratensian chapter here during the first half of the 12th century. The construction of an imposing seminary complex was begun in the 1140s, the church of which was consecrated on the 9th of September 1155 in the presence of Archbishop Wichmann and Albrecht der Bär ["Albert the Bear"]. The colligate church together with its cloister buildings corresponded to the rank of an Episcopal See.

The prominence of the abbey resulted in the restoration of the cathedral chapter of Brandenburg in 1165. This, however, also led to the diminishing importance of Leitzkaus within the Diocese of Brandenburg. At the beginning of the 16th century, a general decline set in that eventually ended in the chapter being secularized following the Reformation.

On the 2nd of April, 1564, thirty years after the abbey had been abolished, Col. Hilmar von Münchhausen acquired the extremely dilapidated compound for 70,000 talers. He and above all his son Statius subsequently rebuilt it as a palace complex in Weser Renaissance style. It is considered the "most important palace structure of the period in the mid-Elbe region" (Dehio), whereby the remodeling was concentrated primarily on the western-lying cloister buildings. A three-storey palace was constructed — the so-called Neuhaus ["New House"] — complete with transverse gables, a round stairwell tower, and richly decorated portals.

The cloister building to the east, which was raised one storey during the remodeling, was later christened the Althaus ["Old House"]. Damaged during World War II, it was mostly demolished in 1950; all that still remains are an octagonal stairwell tower, a gable located in front of the basilica transept, and an imposing loggia with Romanesque pillars on the ground floor. The latter once connected the Althaus with Schloss Hobeck ["Hobeck Castle"], the former provost office, which was also structurally altered in the 16th century and named after a nearby village. The original three-nave Romanesque chapter basilica was restructured into a single-nave, early-Baroque castle church.

Since 1996, Schloss Leitzkau ["Leitzkau Castle"] has been the administrative center of the Stiftung Dome und Schlösser in Sachsen-Anhalt ["Saxony-Anhalt Cathedrals and Castles Foundation"]. Great effort and expenditure was required to scrupulously restore and retain the traditional physical structure of Schloss Neuhaus ["Neuhaus Castle"], which until 1996/97 had been used in part as a school. Comprehensive investigations of the architectural heritage of the façade of Schloss Hobeck as well as the loggia were undertaken prior to the restoration. The comprehensive renovation and restoration work of the castle's interior was begun in 2007 and was finished in the spring of 2009.

In September 2005, in the company of numerous guests and visitors, the Foundation celebrated a week-long festival on the occasion of the 850th anniversary of the consecration of the former collegiate church Sancta Maria in Monte.

A diverse cultural program including concerts and exhibitions awaits visitors all year round. The pottery market held every second weekend in September (Sat. and Son. from 10 a.m. to 6 p.m.), with its extensive cultural activities and broad selection of hand-crafted pottery from all over Germany, has enjoyed ever-increasing popularity for years now. An additional well-liked tradition is the annual Christmas Market held every first Advent from 10 a.m. to 6 p.m. It is opened by Father Christmas himself and accompanied by the Trombone Choir of Leitzkau.

Aside from the numerous stands with their seasonal wares and culinary delights, there are a variety of regional choirs singing Advent and seasonal songs, arts and crafts stations as well as fairytale readings for children, and much, much more. On the Saturday and Sunday before Christmas Eve, the by now traditional Christmas concert featuring the double trio of the FÂÂÂÂÂÂÂ¨rderkreises Kultur und Denkmalpflege Leitzkau ["Society for the Preservation of Culture and Historical Monuments Leitzkau"] is held.