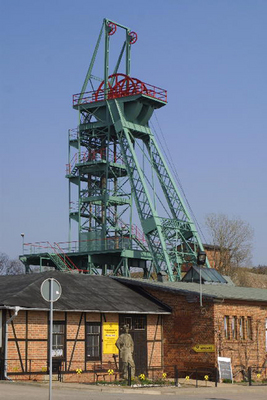 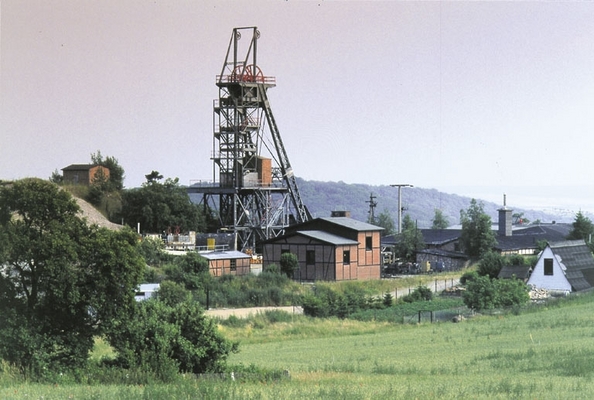 Mining in the region of the "Mansfelder Land" has always been something special in Germany-Comparable deposits can only be found in Poland. The present "Bergbaumuseum Röhrigschacht" (Museum of Mining) in Wettelrode offers the only possibility in Germany to travel through the 800-year-old history of copper schist mining in Sangerhausen.
By an original man-riding system the visitors go nearly 300 m down into a show-mine. After a journey of over 1000 m by pit railway through the pit of the 19th century until today. As the pits - with a height of 40 - 50 cm - are extremely low and impressive, the visitors can easily get an impression of the hard physical work of the miners. The usage of different compressed-air machines for miners makes evident which enormous strain the colliers were exposed to.
The surface museum displays exhibitions of the development of the deposit, of geology and mineralogy, very many exhibits from former mining util todayÂÂÂÂÂÂ´s mining, as for example minerÂÂÂÂÂÂ´s tools, drilling and charging equipment, underground means of transport, equipment and machines of water drainage, one of the oldest steel head frames in Europe, a drum winder from 1922, a winding engine produced by the firm Brown-Boveri in 1939 with various skips. From those underground means of transport several electric and accumulator locomotives with various mine cars as well as a cog railroad, which was only used underground in copper schist mining, are exhibited. The underground tour lasts 75 minutes.
An interesting educational pathway through the old mining country is added to the museum.